Bitcoin mining is a ruthless industry. In the long run, only the most efficient mining companies will survive.

The mining industry’s tendency to attract large amounts of competition, combined with the simplicity and beauty of the Bitcoin protocol, could give us a method of predicting local “price floors” for Bitcoin.

Blockware Solutions, a Bitcoin mining company, released an in-depth report last year on how halving directly affects miners and how much sales pressure will be removed from the market after the halving.

Check out the entire report to get a good idea of ​​how they came to their specific conclusions. However, they estimated that USD-denominated sales by forced miners would decrease 70% after the halving with no price change.

This was likely an important catalyst for the current bull run.

How does this work?

Selling pressure decreases due to the miner’s surrender.

Immediately after the miners ‘capital is halved, the block subsidy is halved, but the mining companies’ operating costs do not change.

Income will be cut in half, while expenses will remain unchanged. Obviously, this is disruptive to any business.

The miners surrender process takes place until the selling pressure has decreased significantly. When the price falls, the pressure to sell disappears exponentially as the most inefficient miners (heavily forced sellers) are excluded from the network.

When can the miners surrender?

The most obvious form of miners surrender is halving. A 70% reduction in selling pressure, estimated by Blockware Solutions, clearly had a massive impact on the market price of Bitcoin.

However, this inefficient cleanup of miners occurs naturally over time and particularly in the context of price cuts.

Examples of simplified miner surrender below

The first model assumes a maximum hash rate and a Bitcoin price of $ 60,000. 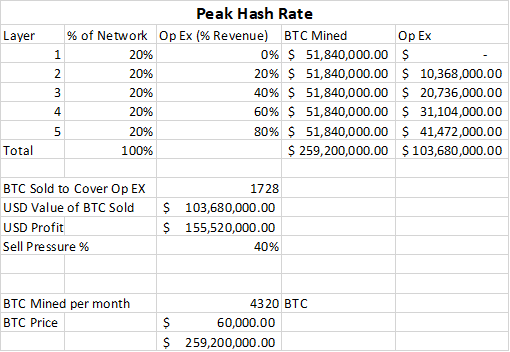 Looking at the model, the mining network is divided into five different layers.

The first layer is the most efficient and makes up about 20% of the entire network. This would likely consist of publicly traded companies like $ RIOT, $ MARA, and $ HUTMF who have access to unlimited amounts of capital available in public markets and who don’t have to sell Bitcoin.

The fifth layer is the most inefficient and also makes up about 20% of the entire network. At the current Bitcoin price, your operating costs are roughly 80% of your sales (Bitcoin mined). This means that their margins are very sensitive to bitcoin price drops, electricity price increases, rent increases, and network difficulties. 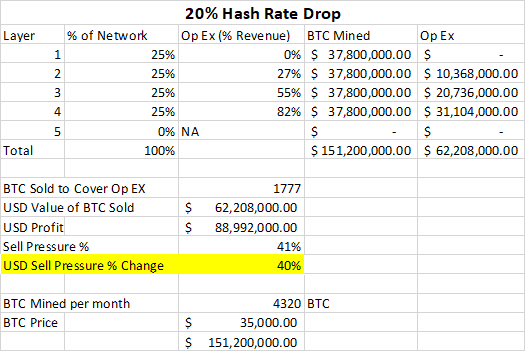 The fifth most efficient layer in the network has now been eliminated. Due to the sudden drop in Bitcoin price, the fifth tier operating costs ($ 41.4 million) now exceed the amount of Bitcoin it can mine ($ 37.8 million). This results in them ceasing to operate and the remaining shifts receiving a greater share of the hashrate.

The interesting idea is that the USD-denominated selling pressure has decreased by 40%. 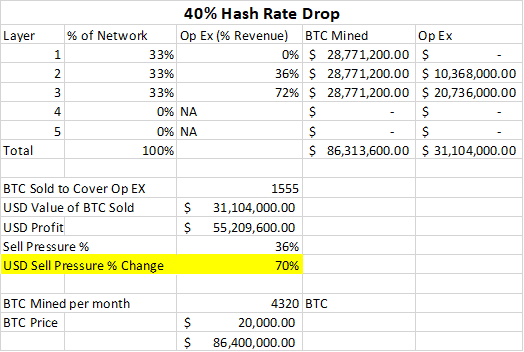 The fourth and fifth layers of the network have now been removed. Due to the sudden drop in Bitcoin price, the operating costs of both layers now exceed the amount of Bitcoin they can mine. This results in them shutting down their operations and giving the remaining layers a greater share of the hashrate.

The interesting idea is that the USD-denominated selling pressure has decreased by 70%.

Hash tapes are an indicator used to measure the surrender of miners.

While the hash ribbon indicator is not perfect, it can illustrate points in Bitcoin’s history where selling pressures begin to disappear exponentially.

The indicator gives a buy signal when the miners capitulate and the price has cooled. Charles Edwards of Capriole Investments explains the hash bands in detail.

With selling pressures easing exponentially due to the momentum of falling hash rates, we can be more certain that Bitcoin has hit rock bottom.

Another interesting point is that the indicator never drops near peaks (2011, 2013, 2017). As the price begins to drop after each local top, the hash rate continues to rise. Since the hash rate continues to rise as the price falls, selling pressure is likely to rise across the network until miners capitulate and signal the bottom during a bear market.

This creates deep bear markets. The price gets significantly overheated for what the network, users and miners can sustainably handle. If the price momentum shifts, miners will still be used as it is still very profitable to mine Bitcoin. Then there comes a time when negative price moves scare off new buyers, but more sellers (surrendering miners) keep popping up as more miners are employed and network difficulties increase.

Since Bitcoin is the best monetary asset ever created and we are watching the world start monetizing it, stacking more sats as it gets exponentially scarce is probably a fantastic idea, as is the case with Hash Ribbon Floors is displayed. This will happen again for the twelfth time in history.

TLDR: Use hash bands to plan Bitcoin purchases when the price has fallen and selling pressure is likely to drop exponentially too.

This is a guest post from Mimesis Capital. The opinions expressed are solely their own and do not necessarily reflect those of BTC, Inc. or Bitcoin Magazine.