Cryptocurrency fraud has risen sharply in recent months, as new figures show. Victims report losing millions every week to criminals who want to capitalize on the Bitcoin craze.

Given the value of bitcoin rallies, the results have sparked warnings that the maddening rush is quickly opening new investors to scammers and potentially overwhelming authorities with far more cases than they can handle.

Data from Action Fraud, the national fraud reporting service, shows that in the twelve months to December, reports of fraud-related cases related to cryptocurrency investments rose 57 percent year over year to 5,581. In January, when Bitcoin continued its rise to record highs, the number of reports more than doubled compared to the same month last year to 720 – the equivalent of around 23 per day.

Overall, victims said they lost £ 113 million to cold callers and other criminals promoting fraudulent cryptocurrency investments in the past year. This is evident from data obtained through a freedom of information request from Investors’ Chronicle. In January alone, £ 14.3 million were declared stolen – suggesting an average loss of nearly £ 20,000 per fraud.

Bitcoin’s astronomical rise, promoted by proponents as one of the safest assets to invest in, has sparked a flurry of advertisements from cryptocurrency investment firms looking to attract new customers. But it has also fueled the opportunism of more nefarious actors who have used online platforms where financial advertising is often beyond government control. In 2018 both Facebook (USA: FB) and Google (USA: togetL) decided to ban all Bitcoin ads on their websites, fearing that many were being used to mislead investors.

Since then, both companies have been repeatedly accused of running ads for fraudulent investment ventures on their websites, some of which have used fake celebrity Bitcoin endorsements. Last July, scammers reaped more than $ 100,000 after hacking several high-profile individuals Twitter (USA: TWTR) Accounts and posting messages that promise followers will double their money by sending money to an anonymous Bitcoin address.

Concerns have also been raised by reports that cold callers are now trying to force older people to invest in fake cryptocurrency systems as Bitcoin gains more recognition beyond its traditionally younger followers. Research by the Financial Conduct Authority found that 22 percent of cryptocurrency investors were over 55 years old in 2020, compared with just 7 percent the previous year.

“There are more opportunities for cryptocurrency fraud,” said Sam Tate, partner and chief of white-collar crime at the RPC law firm in the city. “Some people have made a lot of money off of cryptocurrency, and that attracts investors at risk.” 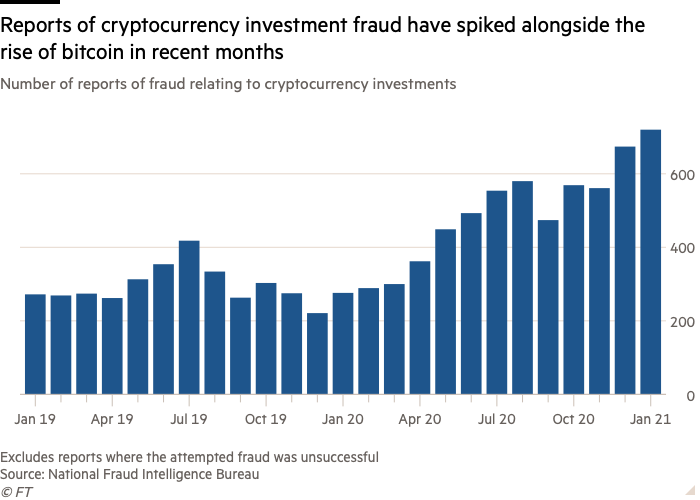 Last month, RPC announced it had received figures from the FCA showing that the number of inquiries the financial regulator has made of unauthorized cryptocurrency deals has decreased from 59 in the past 12 months to 52, the FCA is likely to investigate only the tip of the iceberg when it came to illegal activities related to cryptocurrencies.

“The question is: what happens to these? [Action Fraud reports] could that deter fraudsters? There is a real question about funding fraud investigations and whether sufficient resources can be dedicated to targeted crypto-crime, “Tate said, referring to the £ 100 million budget earmarked for coronavirus-related fraud investigation yesterday. “Where is the additional funding? [for tackling cryptocurrency scams]?

In response to the numbers received from the IC, Superintendent Sanjay Andersen, Head of the National Fraud Intelligence Bureau, said: “The UK police and their partners like the Financial Conduct Authority … know the devastating impact investment fraud can have on victims. both financially and emotionally. We work closely on a cross-system approach to disrupt criminal activity by closing websites and bank accounts, and bringing proceedings against the people who carry out these scams with a view to bringing them to justice. “

He added, “Criminals will go to great lengths to convince you that they are knowledgeable, professional and can offer you a high return on investment for little investment. But remember, if a deal sounds too good to be true, it probably is. “