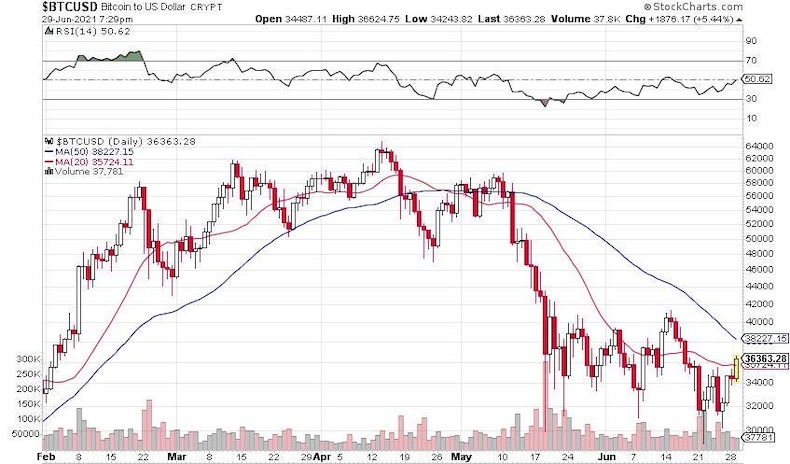 Bitcoin is approaching risk mode after repeatedly testing the $ 30,000 level as support, Katie Stockton, co-founder of Fairlead Strategies, said in a note on Monday.

“Risk is likely to return to the cryptocurrency space if the recovery rally continues as expected,” Stockton said.

Bitcoin rebounded sharply after its steep correction to $ 28,800 earlier this month, with the popular cryptocurrency trading above its 20-day moving average on Tuesday for the first time since mid-June.

“We would consider a breakout above the 50-day MA as a positive catalyst to support a test of secondary resistance near $ 44,000,” Fairlead’s Katie Stockton said in the press release.

What is impressive is the relatively strong movement in the price of Bitcoin despite negative headlines, including China’s bans on cryptocurrency mining, the SEC’s decision to postpone the approval of a Bitcoin ETF, and the UK’s ban on the Binance crypto exchange platform.

A security price rally amid a constant barrage of negative headlines is typically viewed by technical analysts as a sign that a low has been reached and a recovery rally is likely as sellers dry up and are outweighed by upward pressure with new purchases.

And despite the steep price correction in Bitcoin since its peak in mid-April, long-term trends for the cryptocurrency remain positive.

“Long-term momentum remains up despite the loss of medium-term momentum, which supports a bullish bias, although the correction is still in place,” Stockton said.

Bitcoin is up 25% since Tuesday afternoon.

- June 6, 2021
0
El Salvador's President Nayib Bukele said Saturday that he would send a bill to Congress next week to make Bitcoin legal tender in the...

Wall Street Asks If Bitcoin Can Ever Replace Fiat Currencies